John Griffiths of Pound Hill, Great Brickhill, Buckinghamshire was a pupil at The Crypt Grammar School from 1943-48 and studied for his qualifications in Chemistry before taking up National Service in 1957.

His entire working career was spent at Unilever where he spent time in Nairobi before ending his carrer as a director of a large Unilever subsidiary.

END_OF_DOCUMENT_TOKEN_TO_BE_REPLACED

This year, the event will be held at the Church of St Mary de Crypt and the Old Crypt Schoolrooms, Southgate Street, Gloucester, GL1 1PT.

The venue has been undergoing major renovation with the assistance of the Heritage Lottery Fund and our event will be the first function to be held there, following the completion of the project.

The Crypt School has already been working with Gloucester Academy to undertake an audit of teaching and learning, as well as the schemes of work taught in the school.

The results of this audit will be implemented in the New Year with teachers from The Crypt teaching some of the children in maths and science.

Assistant headteacher of The Crypt, Pauline Kirkpatrick will also be seconded to Gloucester Academy for one day a week in the new year to lead on aspects of teaching, learning and assessment.

Nick Dyer, headmaster of The Crypt, added: “It is part of the culture of the G15 to support our fellow Gloucester schools, and our role as a teaching school to support best practice and the development of teaching across our area.

“School improvement is never a quick process however we are looking to raise the standards of teaching and learning over the course of the next few months and this ongoing partnership will lead to better outcomes for all of the children at Gloucester Academy.”

Last year Matt Cass (illustrious OC and sponsor of this very site) organised the first Gloucester Rotary Santa Fun Run in Gloucester Park and he would like it to be even bigger and better on December 8th this year.

Organised by the Rotary Club of Gloucester and supported by Gloucester BID, Marketing Gloucester and Cass-Stephens Insurances Ltd. we hope that all ages, all abilities and all sections of our wonderful City will join with us to celebrate our Community by putting on a Red Hat (or, if possible, a full Santa Outfit) and running, walking or being pushed round a short route in the Park. There will be a 1K route and a 5K route. Registration begins in the park from 9:30am and the run starts at 10:15am on December 8th.

Registration fees: Blue Badge holders/wheelchairs free, Under 16s £4, Adults £8 and Teams of 4 £20. The money will be used to buy medals and pay for the set up costs for the event – any funds left over will be donated to local charities.

Johan and Thinus at The Crypt – rugby tour fundraiser 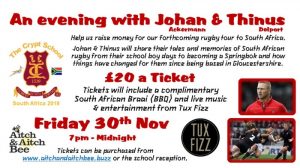 I am delighted to invite you to join us for our main fundraiser ahead of the tour; an evening with Johan Ackerman and Thinus Delport. The event is shaping up to be an excellent evening for any rugby fanatic as well as anyone with links to the school. The South African themed evening will be held in the main school hall on Friday 30th November, 7pm until midnight.

END_OF_DOCUMENT_TOKEN_TO_BE_REPLACED

Heavyweight hero Justin Sysum has made history by winning two major pro wrestling singles titles in one day – including one shown on UK television.

Justin was the star of the day when he defeated Rampage in a classic battle many fans are calling a ‘match of the year candidate’ in the final episode of WOS Wrestling on ITV at the weekend.

A few hours later the 33-year-old from Gloucester beat ‘The Showstealer’ Nathan Cruz to capture the NGW Undisputed Championship in front of a raucous crowd at Hull City Hall.

As you will know the Old Cryptians have been marching in the Cenotaph Parade for many years.

This year is the centenary of the end of WW1 and demand for tickets is expected to be heavy. If you would like to parade with us would you let me know as soon as possible.
I thoroughly recommend parading, it is a moving and uplifting experience!

Please contact Sue Wales (SWALES@crypt.gloucs.sch.uk) at the School for information on remaining tickets

Aiden Horsley has been dubbed a ‘medical miracle’ after breaking his neck and leaving doctors fearing he would be be paralysed for life. 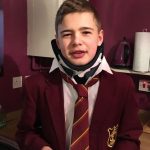 The 14-year-old gymnast, who had qualified for the British Championships just days before his accident, broke his neck while training on a trampoline in his back garden in February 2017.

But the ‘inspirational’ boy made a remarkable recovery, with him walking just four days after the accident.

The gymnast, who attends the Crypt School and trains at Checkers Gym in Morelands Trading Estate, specialised in tumbling which combines gymnastics with the skill of trampolining.