The video game industry is booming, as our culture become more digitalised gaming has simply become more accepted. We live in a day and age where elderly people on buses are playing games on their phones while they ride the bus. 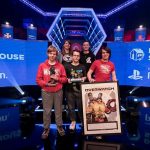 That’s where Digital Schoolhouse from UKIE come in. They regularly hold workshops and tournaments to educate schoolchildren on the potential jobs that exist within the gaming sphere. Every year, they host a gaming tournament for schools across the nation – the finals culminated at the Gfinity Arena earlier this week.

Out of all the teams that competed, it was the group  ‘Cryptonite’ from the Crypt School in Gloucester that came out on top in the Overwatch tournament.

The team of 14 and 15 year-olds couldn’t believe their luck, taking home a trophy, medals, a PlayStation 4, a signed Overwatch poster in a frame and a limited edition Soldier 76 statue between them.