One of the grammar schools earmarked for closure in Gloucetershire County Council’s review of secondary education has been praised by education watchdog, Ofsted. The Crypt School in Podsmead has been described as “good and improving” in its latest inspectors’ report. There is some criticism of modern language provision – particlularly French – and ICT facilities.

But the report’s emphasis on impressive exam results and good quality pastoral care is sure to prompt further criticism of Shire Hall’s ongoing schools review.

Pupils at the all-boys school consistently perform impressively both at GCSE and A-level, success reflected by high placings in the Government’s annual performance league tables. 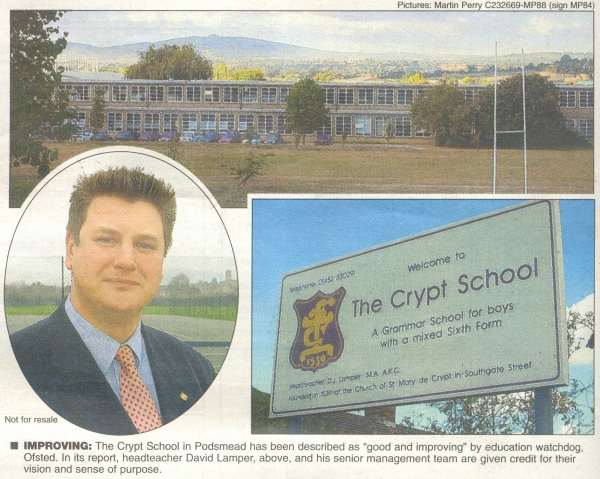 Reflecting on The Crypt’s strengths, the report say: “It is justifiably proud of its 465-year heritage and traditions, but is equally focused on future developments such as its specialist science college designation and emerging sixth form partnerships.

“The school provides a good quality of education for pupils within a caring environment. External examination results at the ages of 14 and 16 are well above the national averages and represent good achievement.

“Pupils’ attitudes to learning are mostly very good and the teaching is predominantly good. The school provides good value for money, evidenced by the considerable value added to pupils’ achievements during their time at the school.”

Headteacher David Lamper and his senior management team are given credit for their vision and sense of purpose, although the governors are advised to be “more rigorous in ensuring that statutory curriciculum requirements are fully met”.

The harhest judgement is reserved for the teaching of modern foreign languauges, described as “unsatisfactory in all key stages resulting in de-motivation of puils”. Inspectors have also called on the school to make sure pupils receive their “full statutory entitlement” to citizen education and ICT provision. Nonetheless, Mr Lamper has written to parents he is pleased with the report. He points to Ofsted’s new framework – launched last September – which demands higher standards than was the case in 1998 – the last time The Crypt was inspected.

The future of the grammar school remains in the balance after education chiefs at the county council decided to delay any decision on closures or mergers in Gloucester. Further public consultation will take place after a project board reports back in July. But the school’s fate is unlikely to be sealed until January 2005.

This year, the Founders’ Day service will be live streamed on the Crypt School YouTube channel on

Headmaster, Nick Dyer would like to invite Old Cryptians and friends to watch the Founders’

Sponsorship opportunities.
1) The club are looking for a business to sponsor the £500 cost for the 2021 Leavers’ Ties.
2) The school are looking for local companies to sponsor new sitescreens for the main cricket pitch. Cost is around £2.5k but some money has already been raised.

We are saddened to learn of the death in January of John Morehen.  John spoke at the school Prizegiving in 2008.

Professor John Morehen was born in Gloucester, and attended the Crypt School from 1953-56 before completing his schooling in Bristol.